A unique collection piece of the Transport Museum was the main attraction during the Night of Museums in the Fiumei Street Graveyard. The restored, decorated Apponyi coach can be visited from 24th June, Saturday afternoon at its new and worthy exhibition place, in the pavilion of the graveyard – thanks to the partnership of National Heritage Institute.

“It is a great pleasure to see this especially valuable coach, which has just got out from under the hands of restorers. The carriage took its place in Fiumei Street Graveyard, in a glass building, erected especially for this art piece. The coach was first used during the funeral of Count Albert Apponyi, and it had been prepared for long years in Misura carriage factory” said Dr. Gábor Zsigmond, Deputy General Director of the Hungarian Museum of Transport after the arrival of the carriage to its final location.

The specially designed, complexly constructed decorated coach – also known as the Apponyi carriage – is a real curiosity. The carriage was prepared based on the plans of Károly Jordán carriage engineer, and it is the only piece of the factory which has remained. As regarding its size, it is the largest hearse in Hungary now. The body of the carriage is decorated by four female statues which were carved by a sculptor named Ludvig; while the maker of the special corner lamps with polished glass is Gyula Regenbach, a tinsmith master, a constant supplier to Székesfőváros Funeral Company, whose work was multiple times awarded with medals at industrial exhibitions. The body of the hearse is ornamented with acanthus-leaf carvings, while its top is decorated by a peak, forming flames. With its fine ornamentation, its carved wheels, and curved glass pane windows prepared from patterned mirror glass, the hearse is among the greatest, even regarding the international scene. The coach had originally been drawn by four pairs of horses, and had been manufactured especially for funeral purposes in Misura carriage factory between 1928 and 1932. The carriage was ordered by Székesfőváros Funeral Company, and later it was transported to Budapest Funeral Company, and from them, finally, to the collection of Transport Museum.

The hearse now arrived to its new, permanent place of exhibition from Somoskő Restoration Workshop. Due to its size and specific character, the museum could not fit this wonderful piece into any of its existing exhibitions, however, museologists of the institute kept it with care, and researched its history in the meantime. Due to careful storage, good design, and prime construction the body of the carriage was preserved in a good condition, it was statically undamaged. No rotting was visible on it; only tiny cracks, a little fretting and small lacks of paint was observable on its body, and the aging of grease and rubber parts. The most sensitive parts, the lamps, and the perch cover were a little more worn out by time, since fine, chiselled, non-ferrous metal, and textile are less enduring material.

The hearse was disinfected during the restoration; it was cleaned from shedding paint, then material analysis was performed to define the pieces of the wooden structure. The cleaned structure was handled with abrasive blasting, then a wooden conserving liquid was applied to the surface. After this, the missing parts were replaced and the cracks eliminated. During the processes, restorers tried to remain true to original techniques – this is the reason why glue chalk was applied during filling the cracks. After varnishing, founding, and grinding, the hearse had got two layers of black primer, then the process became complete with two layers of satin varnish. Since hearses were often decorated with silver ornaments, the elegant, unified blackness of the carriage becomes even more unique.

Restoration of textiles was also carried out with such carefulness: after a thorough microscope analysis disinfection and clearing was executed, then the lacks were refilled with textile almost identical to the original. Following this, the reinforcement of borders happened, and finally the ornaments were cleaned and re-bound.

The funeral hearse was first used at the funeral of Count Albert Apponyi; later it was only used on a couple of occasions. The namegiver of the carriage was a famous conservative politician of the era. He was a Minister of Public Education and Religion between 1906 and 1910, then he was elected to be Minister of Public Education again between 1917 and 1918. The diplomat Apponyi was multiple times nominated to Nobel Prize; he was widely respected by his contemporaries.

After the restoration, the exhibition was completed with interactive surfaces. The exhibition opened on the Night of Museums, with the partnership of the National Heritage Institute. 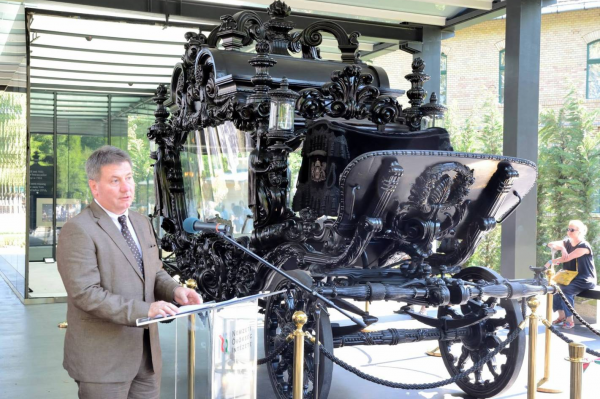 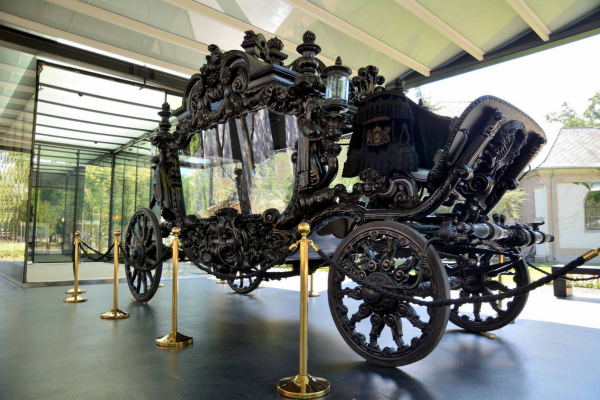 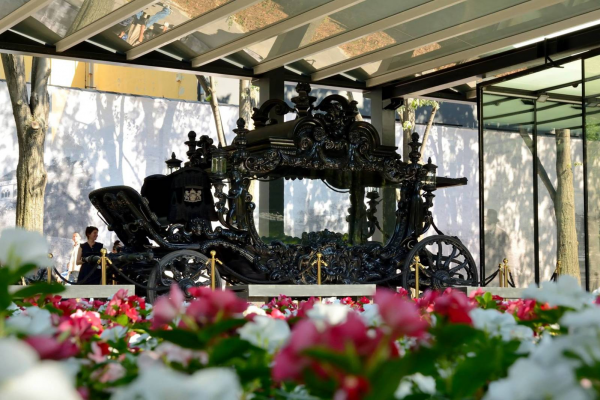 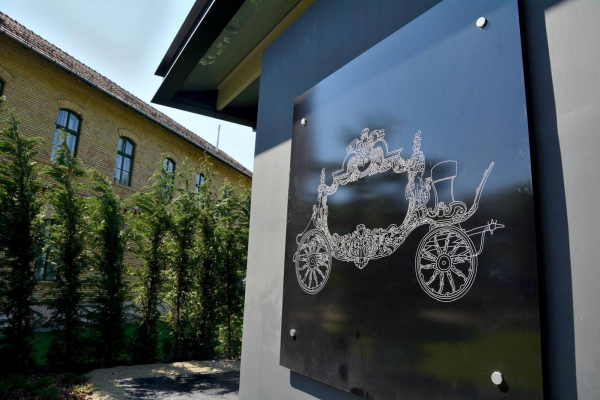 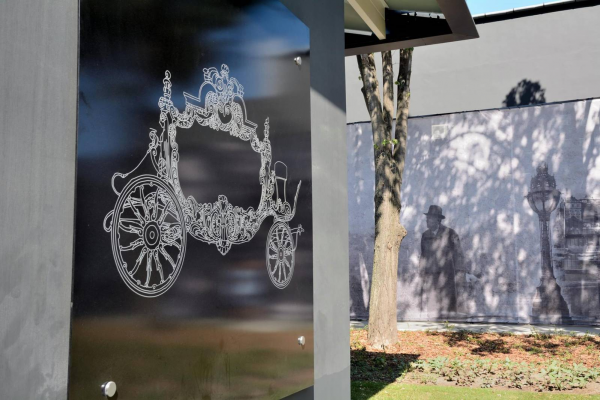 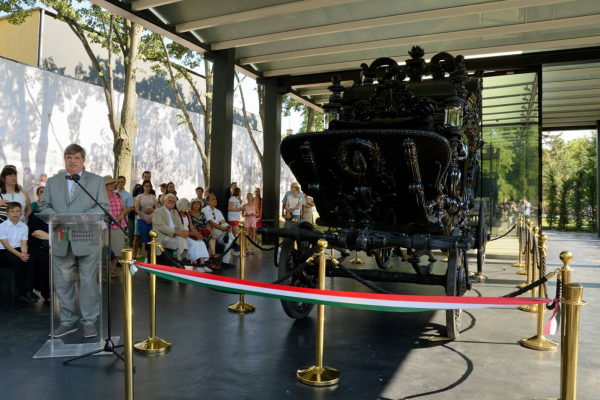 speech of Miklós Merczi, museologist of the Museum of Transport 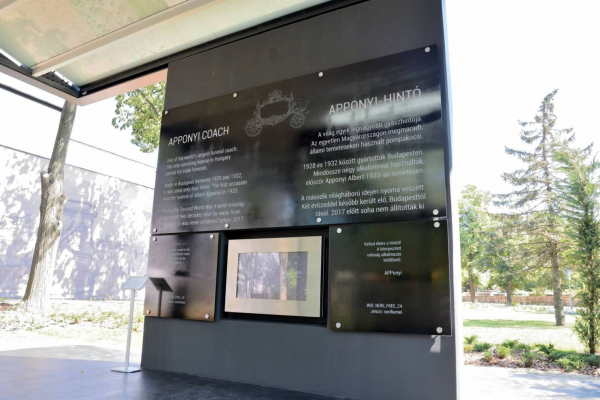 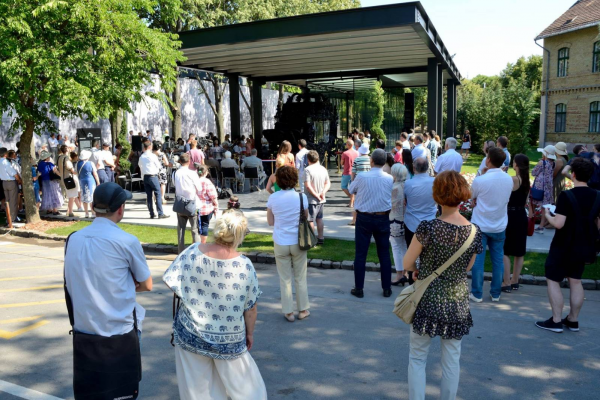 Ceremonial handover in the fiumeu graveyard 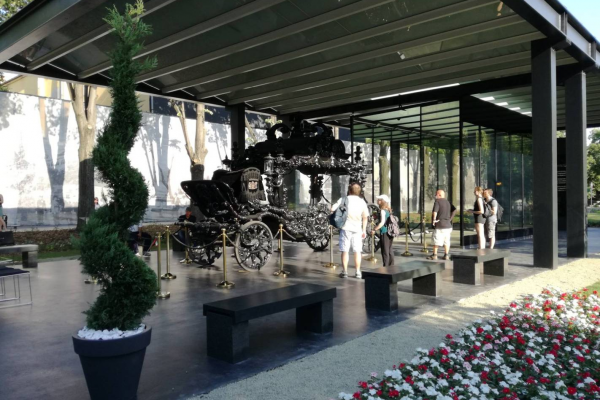